The fauna and flora represented in this triptych were photographed in 2014 in the church of a small German village located not far from Monschau. Each year, in December, a giant crib is installed there.

Animals and details have been photographed in full size. Studio and outdoor shots allowed us to bring additional elements and material to compose these images: feathers, furs, flowers and bark etc.
Hundreds of hours of work in collaboration with the digital department of the Pin-Up studios were necessary to merge dozens of images and get the result of countless superimposed layers.

The character incarnated by the model Jeffrey Jewell is captured by a “Night Shot” process, which reveals a chimeric creature combing the attributes of several animals present in these compositions.
The intrusion of the supernatural into a realistic frame gives the visuals a fantastic character.

The ensemble combines aurora, twilight and nocturnal scenes.
The associated red, green and blue dominants (R.G.B) in additive photographic filtering gives the white light that allow human beings to access the visible.
The absence of light gives the black, conducive to the awakening of the fauna, which, in turn, evades our eyes and arouses multiple fantasies in each of us. A natural sense we have since our childhood.
At night, cradle of dreams and imaginary projections, this bestiary exists in phantasmagorical representations inspired by the works of Giuseppe Arcimboldo or Jerome Bosch, but also representations of legendary animals such as the dahu. Fauna, flora, chimeras and fantastic creatures are thus intertwined in a dreamlike universe that borrows as much from rural tales and mythology as from the world of canvases and hunting tapestries.

I thank the Pin-Up Studios for allowing this project to exist, as well as Matthieu Bouvier, computer graphics designer for his complicity and talent. 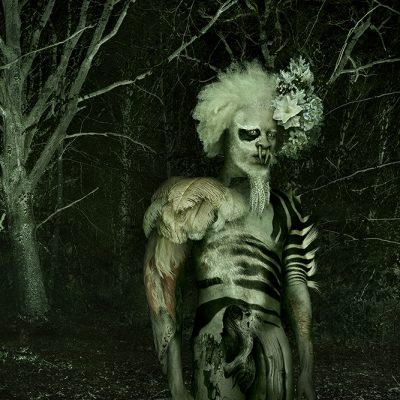 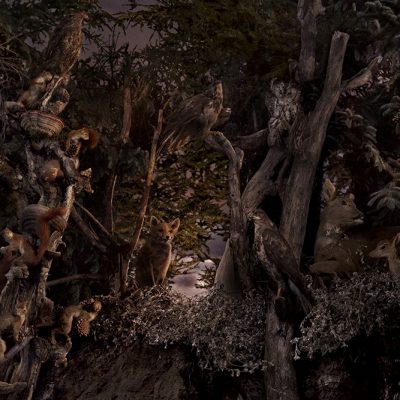 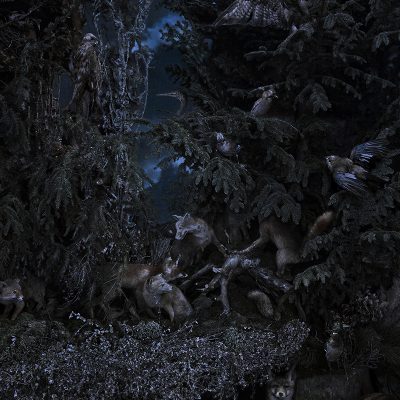